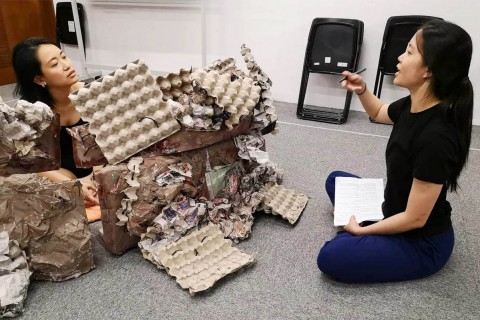 Happy Waiting is an absurdist play written by Beverly Yuen, who is also the Artistic Director of Grain Performance & Research Lab. The play, inspired by Samuel Beckett's Happy Days and Waiting for Godot, goes about a woman trapped in a mound but in high spirits. Director Bernice Lee explores how a stuck human body can produce choreography and drama, and what it means to be trapped, and yet embody a sense of freedom.

Bernice mentions that a major inspiration for Happy Waiting is puppet theatre, children's theatre, and children themselves. She takes away the attitude that a lot of children seem to have (because they need to learn very quickly) comes from the hard work of making sense of the world, recognising that their understanding of it is limited and that the world is much more expansive than they can comprehend. And she thinks adults who are better at relearning this attitude, the better they become at dealing with their complicated daily lives and solving world problems. So she is applying what she learnt from the children to doing everything else in her life, including directing Happy Waiting.

We speak to Bernice to find out more about her principles in melding dance, movements, identities, bodies and Beckett in one. 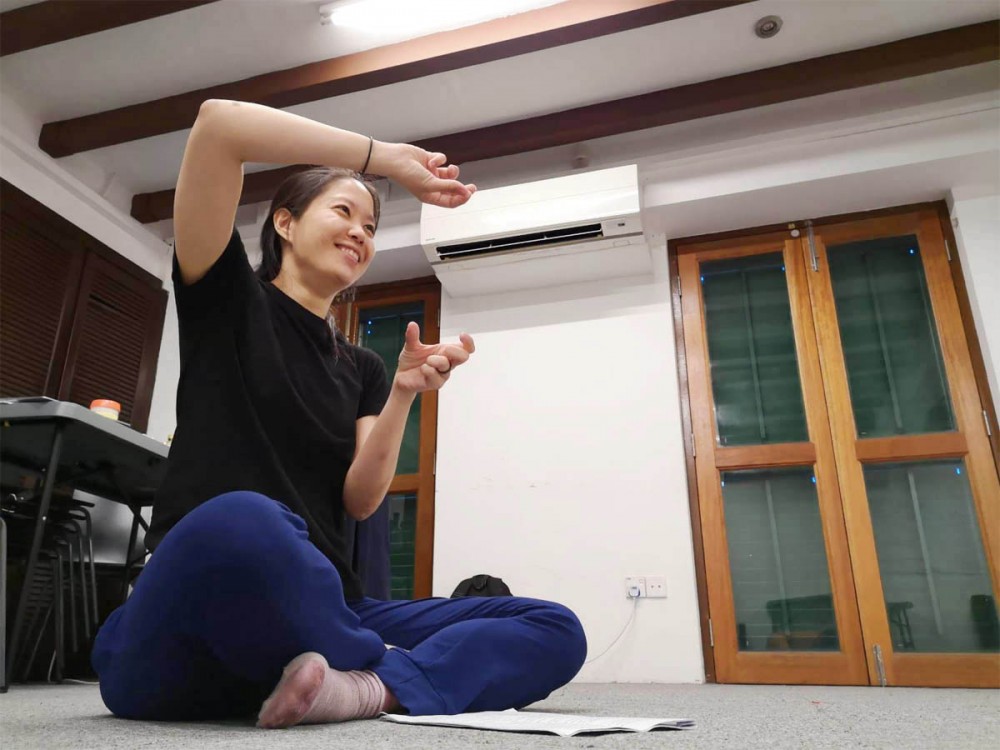 1. How did you come aboard this project?

How I came onboard was pretty simple - the playwright/producer asked, and I said ok. More broadly, I've had a sense of where Beverly is coming from because of some work I've seen at The Substation and MISI (Make It Share It). Also, we met, I would say, via Chin Huat who taught me a lot about dance and dance in Singapore when I first came back from studying abroad. Beverly and I come from pretty different generations and backgrounds, I think, but can understand each other quite intuitively, and we communicate.

2. How did you decide to "choose" Happy Waiting to be your directorial debut? Does it have to do with the subject matter Beckett’s plays are dealing with?

I was curious about directing something that originates in text, and I guess for a dance artist like me to do so, it makes sense to start with something that has a strong reference point in Samuel Beckett, without actually working with his script. His forays into choreography, and his comment that no director really understands his intention, is fascinating to me. I enjoy the struggle to communicate. I enjoy failure and the effort of figuring things out. I think these underpin his work. As for Beverly's original script, I really enjoyed this idea that I am a woman dancer turning into a director, to work with a woman performer/director turning into a writer, to reimagine the depressive disembodied work of a man who was interested in expressing through the body but somehow always felt locked up in it. As artists I think we play with this tension between freedom and constraint a lot. It's like the ballet arabesque, trying to reach infinity.

3. How do you negotiate between the roles of a dancer and a theatre director?

I think like a dance artist - my references tend to be heavily body-based and dance-centric, and my attention is more attuned to movement, image and sound. I guess a lot of post-dramatic theatre and classic Asian theatre is not that distant from dance in the sense that text might not be the first driving force. I enjoy keeping an openness about form and method, and the creative team has a great flow of collaboration. The team and our friends give feedback and input to develop the work, and I believe my responsibility is in holding the work together, sometimes delicately and sometimes tightly. I don't really see separate hats for "dance" versus "theatre" in myself. When it comes to putting together the parts of the work that involve less text and more movement, I'm essentially choreographing movement identities into the work, or making the "script" for the dance. But I'm not caught between being a choreographer and being a director. I don't have to negotiate these roles. I have one intuition for the whole work. 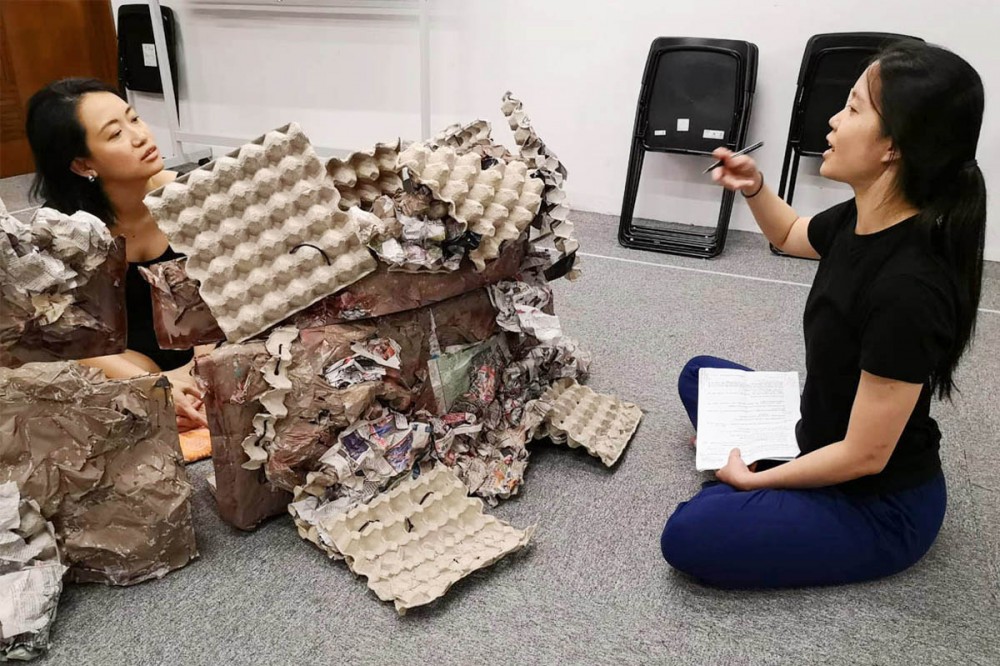 4. Looking at the common theme of absurdity from both Happy Days and Waiting for Godot, what is your concept to understanding absurdity and expressing it on stage? Is there some sort of method that you have applied to direct this play, also considering your background in movements and dance?

I listen to the energy of the room when we work. Is that a method?

I talk with the performers in concrete terms, like "try if you hunch more" or "send your voice from the front of your face", but we also have long discussions about the script, the characters, ourselves, and plenty other things. It's a spectrum.

The best way I understand absurdism is actually through watching Sesame Street's "Waiting for Elmo", and also a great mash-up someone posted on YouTube that uses the sounds from Beckett's direction onto the Sesame Street piece. The cast and I carry the sense that absurdity is very close to what being around young children feels like. I think absurdity is very intimately entwined with vulnerability, and the emotional immediacy of childhood. For me, absurdity is primarily connected to curiosity and the unknown, and I feel these qualities strongly in dancing and engaging the imagination through the body.

5. Is the piece more Happy Days or more Waiting for Godot?

On first glance, probably Happy Days. But if you want to psychoanalyse more, then I think the answer is less obvious.

6. Is the world today absurd?

I think absurdism exists because the fact that we exist, is such an awesome and weird mystery. I think a lot of things are absurd, but mostly because I don't always understand why things are the way they are. Or even if I understand why, if I dig deeper and understand more, at some point, I won't understand again. It's like the question, "why is blue?"

But yes, the world today seems even more absurd than it was 3 years ago. Children are protesting on the streets and telling adults to do their jobs, to deal with the climate crisis. It's really next-level. It's more awful than absurd, though. The world has always had leaders with no moral spine, no concern for their power and capacity to inflict pain on others. Absurdist theatre, comedies and satire, these can help some of us to laugh together, deal with terrible circumstances. But some real life things are literally toxic, and to me, absurdism is a coping mechanism. I don't personally subscribe to relying on it as the primary way of living life. And while the play is influenced by absurdist thinking, what I really appreciate about Beverly's script is the space it creates for reflection, dreaming, and strangeness. There is a kind of beauty in that. 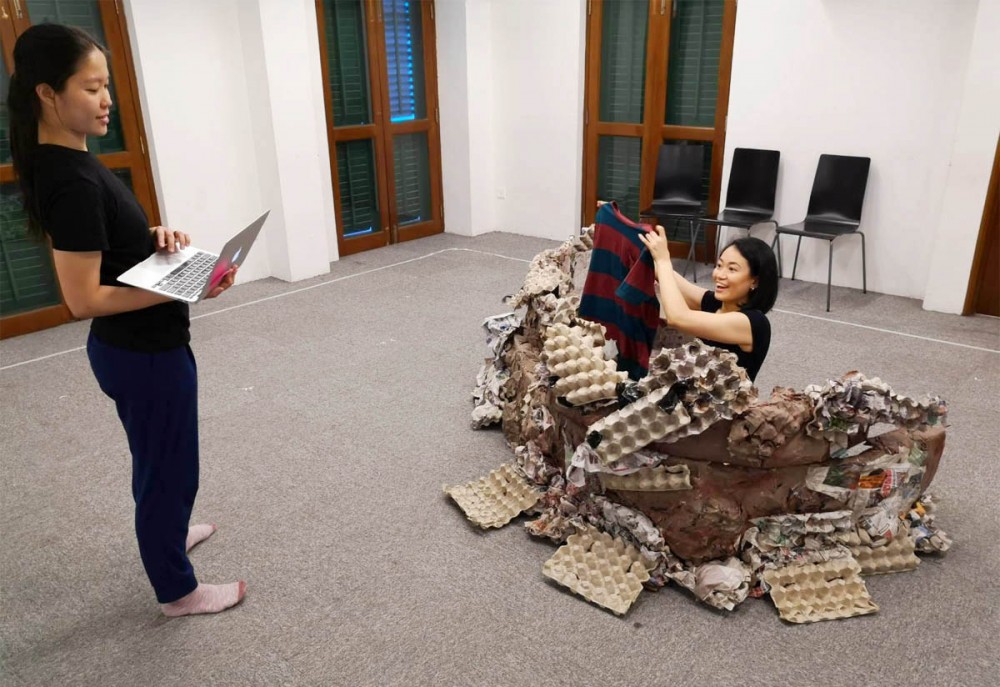 A National Arts Council Bursary recipient, Bernice received a Bachelor of Fine Arts in Dance with Honours from The Ohio State University (OSU) in May 2010, where she performed the works of Bebe Miller, Gu Ming-shen, Meghan Durham, and Sololos by Trisha Brown, directed by Abigail Yager.

Her works have shown internationally in Vientiane, Solo, Jogjakarta, Bangkok and New York. She often devises performances collaboratively and those works have been presented in Singapore at ArchiFest, ArtScience Museum, The Arts House, The Substation, and TheatreWorks. A prolific performer, she has worked for Frontier Danceland (2012-2014) and Maya Dance Theatre (2014-2017). She also performed in Mandala by In Source Theatre at GAC Black Box in 2014 and Shanghai International Theatre Festival 2015. In 2018, Bernice has been developing her artistic practice through residencies including ELEMENT at Dance Nucleus and Time_Place_Space: NOMAD organised by Arts House Melbourne.

Beverly Yuen is the Artistic Director of Grain Performance & Research Lab. Under the collective, she directed and performed in a physical theatre piece A Walk into the Mandala in 2017.

Beverly obtained her Bachelor of Arts (Theatre Studies) from the National University of Singapore and a Masters and PhD in Communication Studies from the Nanyang Technological University. In 1995, she co-founded Theatre OX with Ang Gey Pin and a few other theatre practitioners, and was a full-time performer with the troupe from 1995 to 1999. In 1998, she headed to the Workcenter of Jerzy Grotowski and Thomas Richards (Italy) and received intensive performer training for a year.

Beverly founded In Source Theatre (IST) in 2001 and was its Artistic Director from 2001 to 2013. With IST, she produced, created, performed and marketed more than 20 original works locally and internationally. Beverly also performed in productions directed by various directors/ choreographers such as Lim Chin Huat, Kok Heng Leun, Jean Ng and the late William Teo.

She also penned four full-length plays: D-evil of Light (English, 2001), I Dance I Wander I Wonder (English, 2004), Cage (Mandarin, 2004) and Sleeping Naked (English, 2016). Happy Waiting is her second play to receive developmental support from Centre 42 under the Basement Workshop programme after Sleeping Naked (2016).