[Review] The Orange Production – Drip: A sensitive portrayal of the underlying struggles in an interracial marriage 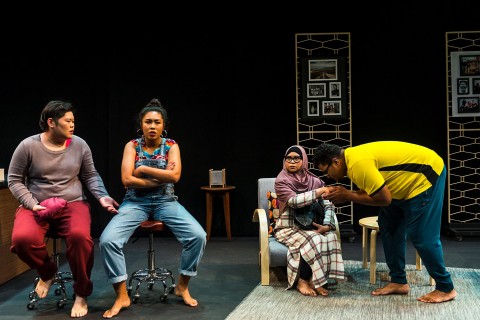 Directed by Haresh Sharma, Drip explores an ordinary day in the life of a married interracial couple, Azam (Faizal Abdullah) and Xiaoyan (Deonn Yang). The play opens with Azam recovering from a hangover and Xiaoyan taking care of him. The couple’s hopes for a quiet day are quickly shattered by a sudden visit from Azam’s sister, Ana (Shafiqhah Efandi), and his mother (Nurijah Sahat). The humour generated from the jests, passive aggressive comments, and exaggerated dramatic fights gradually reveals itself as a thinly veiled façade for the religious and cultural clashes that threaten familial harmony. 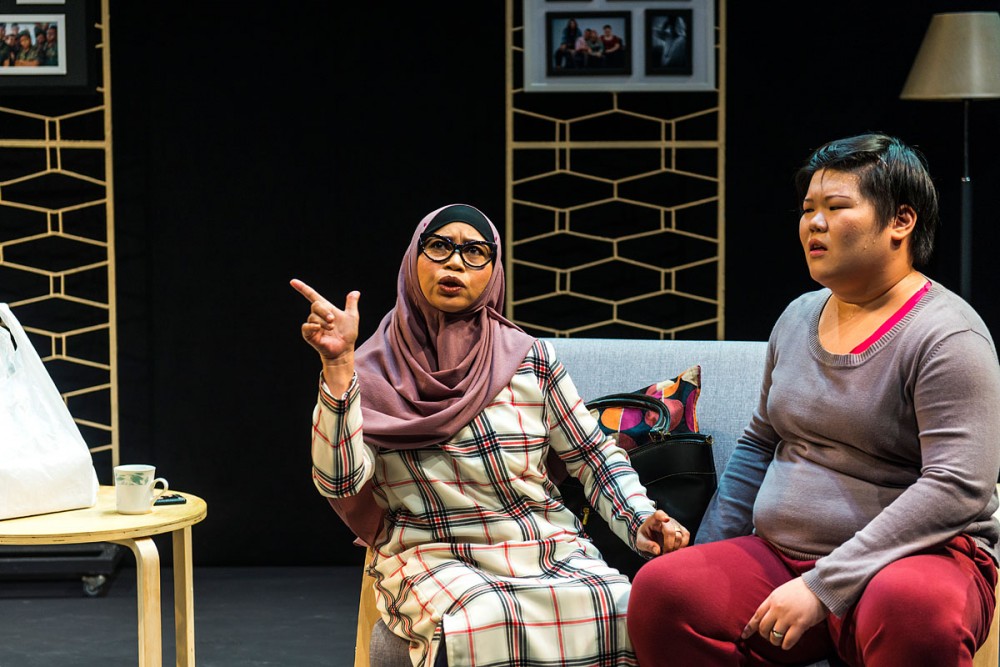 Nabilah Said’s script effectively captures an interracial couple’s struggles to find the middle ground amidst their differences. Xiaoyan’s love and yearning for char siew rice and bak kut teh is contrasted against Azam and Ana’s discomfort towards pork while Ana tries to wrap her mind around Xiaoyan’s Chinese superstitions. Her script also underscores an understanding of the significance of language, especially in communication. Language barriers contribute to Xiaoyan’s exclusion amidst conflicts within the family and subtle references to identity politics are made when Xiaoyan’s mother-in-law romanises her name to Sarah for easier pronunciation. Additionally, the weaving of bahasa melayu into the dialogue lends a truly Singaporean flavour to the play; it is a delight to listen to words roll off the tongues of the three native speakers! 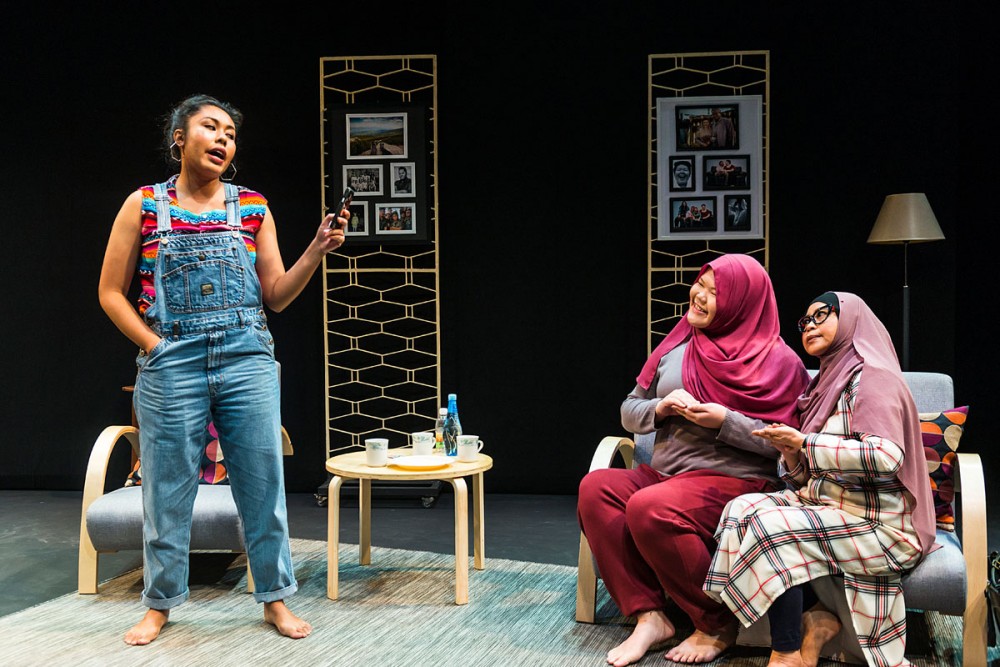 Faizal Abdullah and Deonn Yang deliver a convincing performance of a free-spirited husband and his caring wife. Shafiqhah Efandi plays an outspoken and rebellious younger sister whose strong front masks a desire to be recognised for who she is instead of being constantly benchmarked against her overachieving brother. Nurijah Sahat’s portrayal of the overbearing traditional mother is both endearing and frustrating; she wants the best for her children but sticks her nose into their business and launches into a tirade upon discovering their haram behaviour. 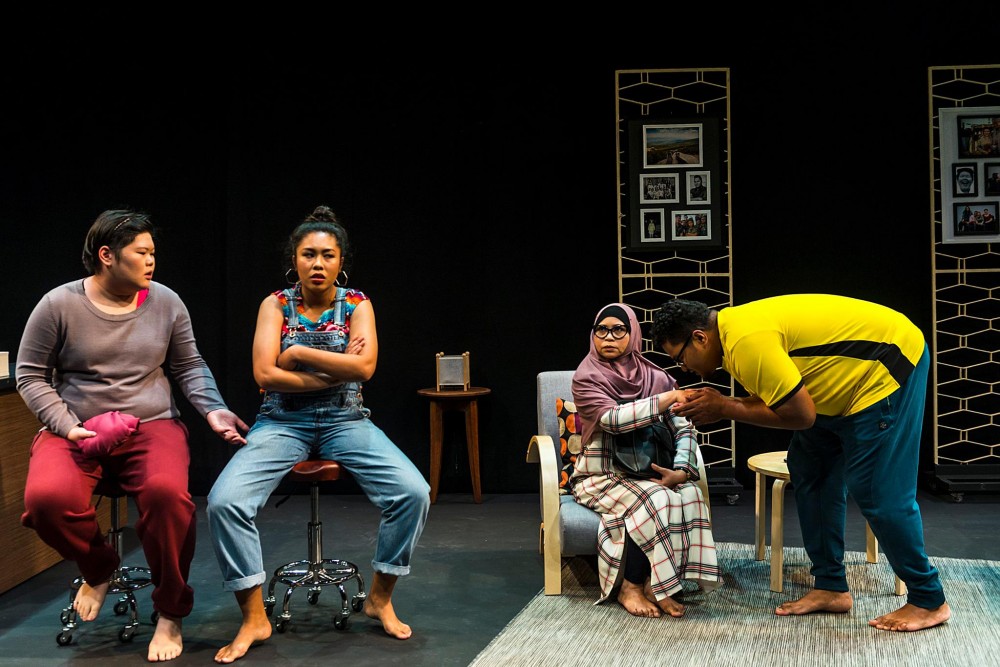 The central metaphor that gives the play its title – the onomatopoeic “drip drip drip” sound of water leaking relentlessly – also makes a literal appearance near the end. The four characters hold bowls filled with water, which spill out uncontrollably, thus bringing the underlying tensions to the fore. This reference to water is a particularly effective symbol because it functions on two contrasting yet complementary fronts: it not only hints at the instability and flux that characterise various relationships within the family, but also provides a hopeful image for greater fluidity and accommodation between the characters.

In an earlier interview I did with Nabilah, she mentioned that a key takeaway she hopes her audience will have is to “not judge people too quickly [because] you never know why they do what they do”. Drip manages to do exactly that through its well-crafted script, nuanced characters, and balanced exploration of the clashes within an interracial marriage. All of that, taken together, renders it an accessible, relatable, and light-hearted work that will make you laugh, but is also not afraid to ask difficult questions about how religious and cultural differences shape a family.

About The Orange Production

2017 marks the 30th anniversary of The Necessary Stage and as part of the celebrations, The Necessary Stage has launched a new initiative – The Orange Production – an exploratory platform where seasoned veterans Alvin Tan (Artistic Director) and Haresh Sharma (Resident Playwright) collaborate with new artists to create small and portable works for the black box. The inaugural edition of The Orange Production features a double-bill consisting of Nabilah Said’s Drip and Faith Ng’s Whale Fall.