[Review] fleet – Life in the Span of a Room

Isn’t it pretty when you open the window and see what lies beyond where you are? That is what the protagonist, Melissa Leung Hiu Tuen, does in the end. This is, perhaps, parallel to what the performance is trying to convey.

If one could hold one’s breath for 75 minutes, I would watch the show in one long exhalation.

The play opens with the blinking on and off of a flood lamp, bathing Centre 42′s Black Box in pulses of warm, yellow lighting. The short spans of brightness force me to scrutinise a different corner of the room each time the light goes on. And as my eyes adjust to the periodic darkness, each window period of visibility turns up details of the room in greater clarity than it would have been in broad daylight. 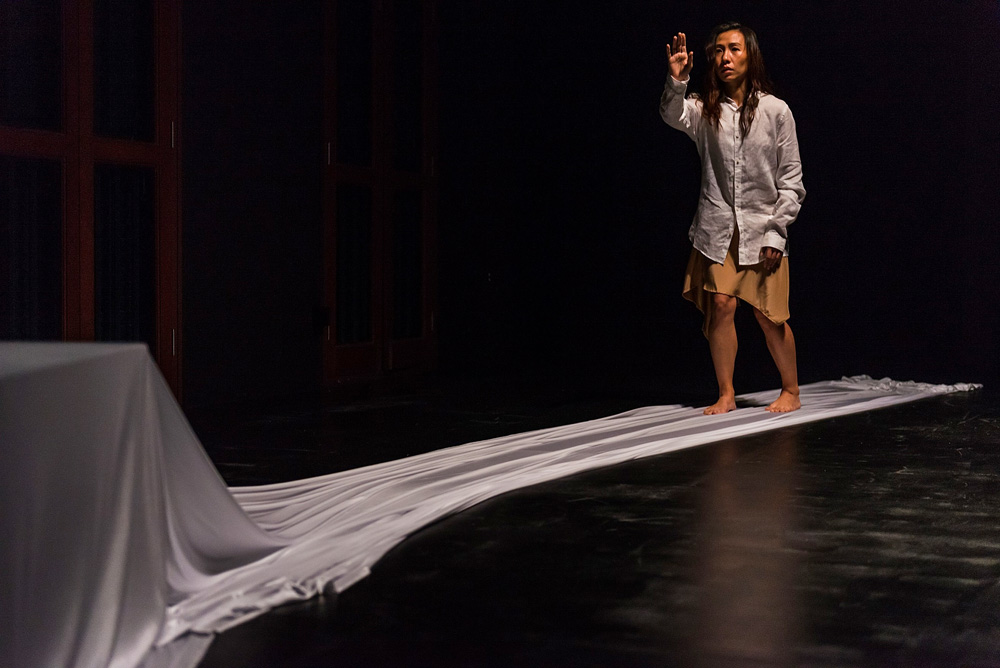 Three minutes pass, the speed of the pulsating light changes, sometimes quicker, sometimes slower with less intensity. As an audience staring into the alternating brightness and darkness, I quickly enter a pseudo-state of hypnosis. I imagine myself a patient lying on the white sheets of a hospital bed, blinking, like the lamp. Snippets of the room enters the field of my vision, and I wonder what will happen if I were to die tomorrow? I imagine myself sitting in a car on a gloomy evening, looking across the bonnet of the car whose wipers sweep from right to left persistently, temporarily blacking out my vision like now. Soon, the alternating brightness proves too much for me to bear, I close my eyes.

Are these the thought processes a dying person goes through? Are these the same feelings one feels when about to lose a loved one? Perhaps what theatre wants from you is not sympathy, but empathy.

fleet feels more like a tribute to the space, than simply to ‘death’. The performance is a beautiful union with the theatre space, given that they (performer and room) were strangers the week before. The lighting creates an ethereal sense of dimension; the witty use of aerial sounds like the lizards clucking, the night crows cawing and the swallows chirping to signal the passing of time.

Melissa enters, looking small and petite next to the giant wooden door, and collapses into a heap on the floor with a loud noise, thrice. That is the first time I notice the glass of water sitting innocently, diagonally across the studio, in the direction where the protagonist seems to be heading, but is interrupted. Or incapacitated physically, or distracted by the white-collared shirt hanging in mid-air.

The protagonist goes through a series of emotional turmoil as she is forced to recall the demise of her lover. She puts on, I assume, his white shirt, like how a heartbroken lover would and performs several painstakingly slow tasks. One of which involves her unfolding a long piece of white cloth over the cuboid prop, with meticulous calculation and painful slowness. This act can well signify the clinical changing of hospital bedsheets, or the laying of a piece of cloth over a coffin or body announced dead. 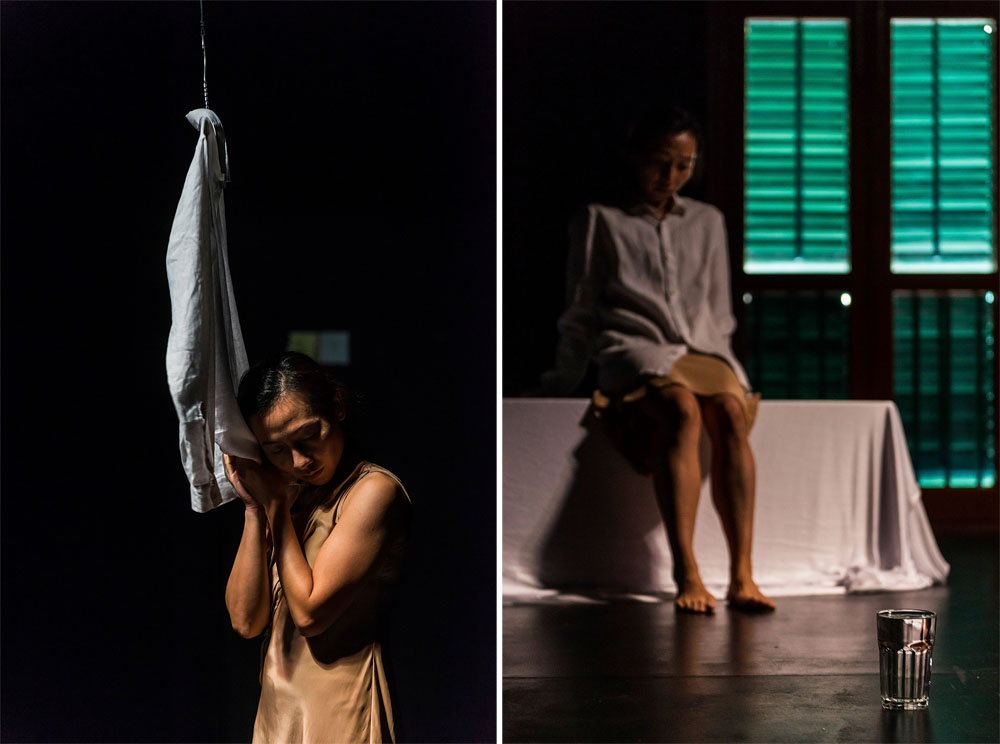 Accompanying the performance, is the voice of Janice Sze Wan Poon, Hong Kong playwright and text creator of the play. She manifests the voice of a bedridden patient, who is dependent on assistance for all the basic necessities in life, such as the drinking of water, getting down from the bed, and going to the toilet.

An oasis is no different from a mirage if a person has no means to drink from it. Janice, in a post-show chat, mentions that she is concerned with the dignity of patients at their deathbeds, such as those who are unable to drink – an action that we do without thinking, even though the cup may be right at their bed side, just because they are missing a straw.

The struggle of the patient trying to leave the bed coincides with the inaction of Melissa lying on the cuboid box on stage. Both parties may be on opposite sides of the same spectrum, one being the dying patient, the other the recipient of the loss, but both experience the same immobility. Albeit, the protagonist’s difficulty stems from a melancholic inertia to carry on with life.

A rhythmic thumping sound of water dripping into a puddle in the middle of the floor takes over the stage. Sitting in the front row, I trace the drops of water to the ceiling and is reminded of the drops of saline water inside the drip chamber of IV bags. Later, Melissa moves to stand beneath the leaking ceiling. Her white shirt is now soaking wet, from the water or from crying her heart out, I’m not certain.

The play parallels the loss of a loved one to a deprivation of water.

At the end of all the struggles, the protagonist finally reaches for the glass of water, and drinks it in one gulp, allowing water, and hence, life, to occupy her body again. After which, she positions the glass to collect the dripping water, refilling the empty glass.

I guess this gesture signifies the protagonist coming to terms with the demise of her lover, accepting the hand that life has dealt her.

Nearing the end of the play, in darkness, an array of green light fans out near the box where Melissa lies. She crunches up and does a dance lying on her back. At times, her limbs interact and interfere with the array by chance, portraying an angelic portrait of herself under a diaphanous green veil of light. As the play draws to a close, Melissa opens a window, further signalling that she is ready to leave her sorrow behind. A path of measured light falls onto the floor, leading to the exit door. And she leaves.

I stare into the beautiful studio space in silence, yearning to mourn a little longer over what I have just seen. The narration complements the closure of the play by alluding to the space that we are in, noting the similarity in the emerald, jade and copper colour of the patient’s skin and the skin of the studio.

Can we ever be ready to un-occupy the heart of a loved one? 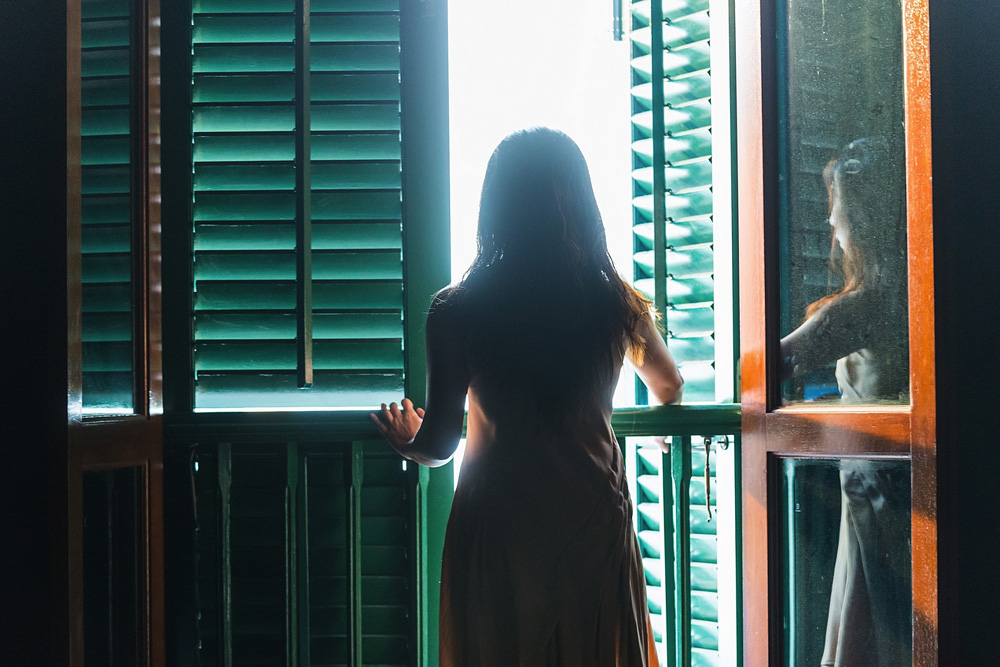