Hayato Sumino Singapore debut. Join us as we witness one of the finest pianist of the new generation LIVE at the Victoria Concert Hall.

Born in 1995, Hayato Sumino won the Grand Prix of the Special Class of the PTNA Piano Competition while he was a graduate student at the University of Tokyo in 2018. This was the start of his full-fledged musical career.

He studied with Jean-Marc Luisada, Katsuko Kaneko, and Tomoaki Yoshida. He graduated from the University of Tokyo's Graduate School of Information Science and Technology in March 2020, and received the University of Tokyo President's Award. Currently, in addition to performing concerts in Japan and abroad, he also writes, arranges, and performs his own music under the name of "Cateen" on YouTube, with over 1,000,000 subscribers and 100 million views (as of June 2022).

He has been engaged in research on music information processing at the Institute for Research and Coordination in Acoustics/Music (IRCAM) for six months since September 2018, and gave recitals in Paris, Vienna, Poland, and elsewhere to great acclaim. In December 2019, he held his first solo recital tour in five cities in Japan. In the following year, he made his debut at Suntory Hall, where tickets sold out on the day of release. And in June 2021, he made his debut at Blue Note Tokyo.

In December 2020, he released his first album "HAYATOSM" (eplus music), which was distributed worldwide. In Japan, it topped charts for both classical music and the overall music categories. In 2019, he played piano and arranged all the songs in the album "Sumi Shimamoto (character voice of Nausicaa) sings Ghibli Renewal Piano Version" (WMJ). He is involved not only in classical music but also in collaboration with various genres of artists and in composing and arranging commercial music. He has appeared on numerous TV programs as a pianist. He is a CASIO electronic instrument ambassador and Steinway Artist, as of 2021.

Beyond international repute and critical acclaim in classical music, he is gaining worldwide focus and popularity as a new genre of piano artistry who truly transcends many genres of music. 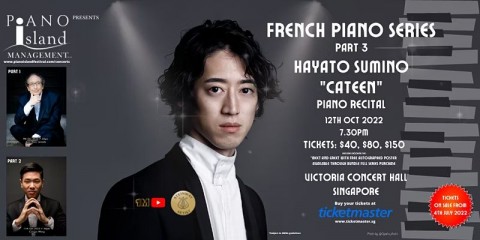