Organised by: Our Tampines Hub

The Caribbean Film Showcase will be held at Our Tampines Hub, and 9 inspiring and thought-provoking films from Mexico, Cuba and Venezuela will be screened at its Festive Arts Theatre.

These films represent award-winning and independent filmmakers from the Caribbean, Latin America, Africa, and its diasporas, and they will be open to the public for free at Our Tampines Hub's Festive Arts Theatre till 25 April 2021.

Filmmakers from Mexico, Cuba and Venezuela have been leading the way globally. One example is the screening of 'Esteban' by award-winning director Jonal Cosculluela. This inspiring and moving story is shown through the eyes of a young Afro-Cuban boy and his heart-tugging journey of achieving his dream to become a pianist.

Look out for another thought-provoking film 'Habanastation', a 2011 Cuban drama film directed by Ian Padrón which addresses inequalities in Cuba through the relationship between two children of different social strata.

From Venezuela's renowned director Luis Alberto Lamata, dive into the lives of four very special couples who fought to achieve their wishes in 'Central Park'. This unique anthology film features four stories full of humour, drama and passion linked to a singular setting in Caracas.

Some of these films are entertaining and amusing, they capture our imagination, inspire and uplift us, invite us to think and reflect, and challenge our values and worldviews.

To catch any of the nine interesting movie films, tickets can be redeemed at Our Tampines Hub's Customer Service Counter upon registration via scanning of the QR code. One person is entitled to redeem 2 tickets only and first-come-first-served basis.

The Caribbean Film Showcase is organised by Our Tampines Hub, Embassy of Mexico, Embassy of Cuba and Embassy of Venezuela. 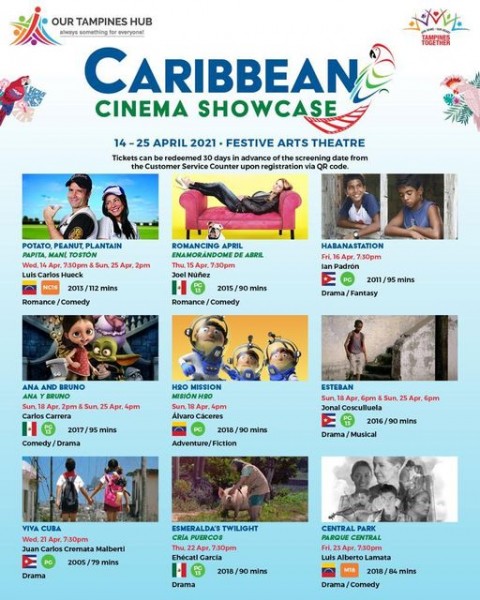