Cuturi Gallery is proud to present Fairy Conclave, a solo exhibition by Marla Bendini (b.1986). Fairy Conclave provides an intimate look into a new series of oil paintings that offer an alternative rendition of popular objects and figures from fables and folklore, allowing viewers to re-examine their perspectives regarding the mutability of one's body and identity.

Marla Bendini is a transgender, non-binary, visual and performance artist based in Singapore. Marla's artistic persona found her origins amidst the intersection of art and life, allowing her to personify fluidity with pomp, pizazz, and a confidence that preens itself in the face of conservative Singapore. Identity and its representation are major themes in Marla's oeuvre, as she is continually exploring the organic, amorphous nature of the body and its expressive capabilities, utilising them to craft new visual frames that actively challenge societal constructs of identity. Marla has performed and exhibited her work in Singapore, Malaysia, Macau, Sweden, Spain, and the U.S. Most recently, Marla had her first solo exhibition with Cuturi Gallery "Back Room" in 2020.

Fairy Conclave is an invitation into a secret gathering of fairies and folklore, where magical beings converge to unveil new sides to familiar stories passed through generations. In her novel representations of mythical subject matter, Marla's paintings also take viewers down an introspective rabbit hole, provoking us to delve deeper into the various facets of our identities. Her works are akin to imaginative fields that tease out images from inner thoughts, allowing their forms to coalesce and metamorphose upon the canvas, capturing the transfixing beauty of the fluid and forming. The introductory piece Fairy Conclave (2021) encapsulates this idea in its ephemeral, translucent aurora of light blue and purple wisps that hover above a grassy field like a luminous halo. This iridescent sphere is the titular fairy circle which conceals a community of fairies and sprites from the naked eye, and viewers are enticed to cross this boundary into a new threshold brimming with possibility. The circle encourages viewers to access a different set of eyes and tap into their creative prowess to glimpse scintillating sights that are not part of our mundane reality.

Tiger Lily (2020) stands out as one of the more prominent works in the exhibition, the subject's svelte yet imposing figure making her presence felt throughout the room. What was initially a tiger-like form slowly morphed into a chimerical were-tigress, with the tiger's characteristic stripes and tail melding to form the woman's voluptuous physique and long braided hair. While the title itself bears associations with Greek and Chinese legends, the were-tigress's shapeshifting abilities render her as a liminal figure; a queer individual who exists in between both man and beast, possessing both grace and ferocity. She is cloaked in flames – a layer of bright oranges pelted on to the canvas with a painted rag by the artist – yet she seems strangely at ease with these crackling embers upon her flesh as she lowers herself languorously into a lake. Rather than consuming her entire being, the blaze empowers her to shine brighter even as she descends into water. The fire's juxtaposition with water suggests the dual nature of the destructive and generative forces that make up our identities, and this woman-beast hybrid aptly embodies a harmonious balance of these forces, a portrait of grace and fury.

I Hope the Grass is Greener, Whichever Path You May Choose (2021) makes use of the popular Pandora's Box image to reflect upon subjects of growth, transformation, and the freedom to choose our own path. A velvet chest opens to reveal increasingly smaller chests like a Matryoshka doll, with each chest being surrounded by patches of verdant overgrowth, expressing a never-ending series of choices throughout life and a yearning for greener pastures. Gilded butterflies are scattered across the canvas, presumably fluttering out from the opened chests, acting as charming symbols of metamorphosis and liberation. One could conceive of these golden butterflies as a manifestation of hopes and aspirations; the desire to take flight and freely pursue any path of our choosing.

Marla Bendini's Fairy Conclave offers us a glimpse into a wondrous sanctum of fabled figures and objects. Through her unique take on familiar fairy tales and folk stories, Marla ignites the imaginations of audiences and compels us to look past social conventions towards the deeper, more formative aspects of our identity. 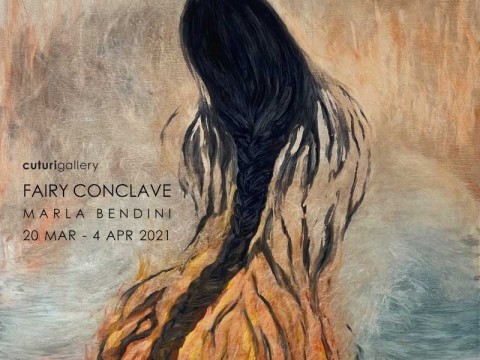