Organised by: Esplanade – Theatres on the Bay
Performed by: Apsaras Arts

Banteay Srei is unique among Cambodia's famous sacred buildings. It stands out from other ancient Angkorian temples with its petite size, the pink hue of the hard, red sandstone from which it is made, and the intricacy of its exquisitely sculpted wall relief carvings of motifs, figures and scenes from the Hindu Mahabharata and Ramayana epics.

Built by Khmer courtiers in the 10thcentury, Banteay Srei was originally named Tribhuvanamaheshwara, and its surrounding town named Isvarapura, both in dedication to Lord Shiva, though the temple venerates both the gods Shiva and Vishnu. Later on, it was dubbed Banteay Srei or "Citadel of Women" in Khmer, perhaps in tribute to the plethora of enchanting femaledevatas(deities) adorning the temple's walls as well as the life-sized sculptures ofyogini(sacred women) found within its compound.

See these ancient figures and scenes from the Hindu epics come to life and listen as the yoginis unravel mystical stories of the sacred temple in this exhilarating dance production.

A digital premiere for Kalaa Utsavam 2020 by Singapore's Apsaras Arts Dance Company, established in 1977, recently the inaugural recipient of Stewards of Intangible Culture and Heritage by Singapore National Heritage Board. 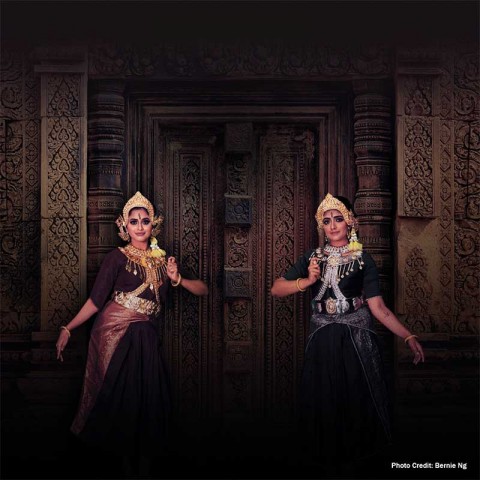