Sing along to popular tunes by homegrown talents, from the comfort of your home with TGIF Music Station: SCCC x YES 933! Taking place on every first and third Friday of the month, the popular series of music showcases our favourite performing artistes and rising stars. Bask in the soothing ballads by Issac Yong, and as night falls, get ready for an electrifying night with multilingual band Too Much Drama (TMD) and powerhouse songstress Tay Kewei!

Gather your friends and loved ones for a musical escapade that will hit all the right notes!

Lunchtime Performance - 12:30pm
Isaac Yong, a Singapore singer-songwriter, has received recognition through various competitions, most notably as the Champion of the Music Xpress Songwriting Competition in 2015. Isaac has written and performed originals, as well as covers, through live performances and online platforms such as YouTube, Spotify and KKBox, and has garnered over 100k monthly listeners and over 3 million streams since then. He also has a presence in China with over 20k fans and 8 million streams on popular video website Bilibili and music streaming service QQ Music. His cover of "Won't Cry" has also been shared by Jay Chou on his Instagram Stories.

In 2018, Isaac held his first ticketed concert "World Through Our Eyes" organised by in::music, presented by Esplanade Singapore. In the same year, Isaac also held an original showcase as part of the "We Are Singer-Songwriters" Series organised by Huayi - Chinese Festival of Art in Esplanade.

Evening performances - 8:00pm
Going on their 6th year at Switch By Timbre X, Too Much Drama is a seasoned band that boasts an extensive multilingual repertoire. They are best known for their renditions of Top 40s English and Chinese hits from the past to the present; and also performed a variety of Hokkien, Cantonese, Thai and Korean songs.

Look forward to Leon's antics on stage and his JJ Lin-like voice; and be wow-ed by Allie's powerhouse vocals and her unique character.

Providing the music and back-up vocals are: Benny on lead and rhythm guitar, Jerry on keyboards, Mah on bass guitar and keyboard bass, Glenn on drums and SPD.

They hope that you'll enjoy their performance as much as they enjoy performing to you.

She has since released 3 full length albums under her belt, which broke through the Asia market regionally.

Kewei was nicknamed the "angel of harmony" and she plays several instruments such as the guitar, ukulele and piano, but catches most attention by playing the er-hu. Kewei's talents has got her involved in many events and performances, such as the NDP Parade 2014, Celebrate SG50 Countdown show, Temasek Holding's Jubilee at the Botanic Gardens, SEA Games 2015, ASEAN-China Friendship Concert and The Eye Ball 2017 at Goodwood Park Hotel, just to name a few.

In June 2016, Kewei staged her first full-fledged solo concert at the Esplanade Concert Hall, and were well-received by the media and public alike. She also released her latest EP "Chi" in conjunction with the concert. 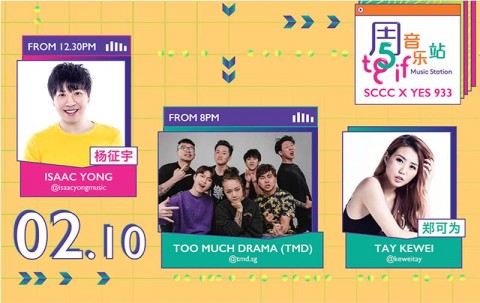