Organised by: Esplanade – Theatres on the Bay
Performed by: The Venopian Solitude (Malaysia) featuring .gif (Singapore)

What do a tissue box, a ukulele, a toilet roll and a children's xylophone have in common? Suiko Takahara (not her real name, by the way). The Selangor-born singer-songwriter fashions quirky sounds and rhythms out of anything she can get her hands on, and it doesn't stop there.

Created more than a decade ago in a dusty room of an undisclosed college dormitory, The Venopian Solitude is Takahara's labour of love and music project through which she gets to put on her experimental cap. The trilingual artist writes in Malay, English and Japanese, and released her debut eight-track album, Hikayat Perawan Majnun (Tales of a Lunatic Damsel), in 2014. She was nominated for Best Music Arrangement, Best Music Video and Best Album Recording at Malaysia's music industry awards, Anugerah Industri Muzik 2014 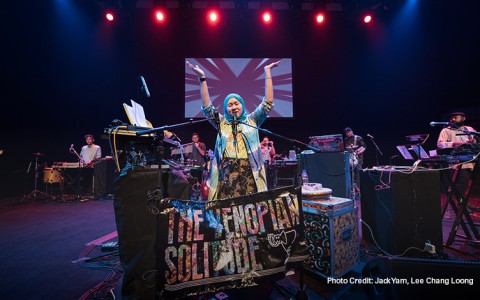