** This programme is cancelled. **

Curated by the Asian Film Archive (AFA) for the Singapore International Festival of Arts 2020 (SIFA), Singular Screens celebrates diverse, independent and singular visions from Singapore and around the world. Discover a bold palette of cinematic adventures, featuring the ingenious and risk-taking in film. Screenings will be held at the Screening room at SIFA's Festival House and Oldham Theatre.

A Love Unknown
A woman in New York and her abandoned daughter in Singapore, both grappling with thoughts of suicide, pursue a change in their lives. Over four days, their lives unravel, revealing an inter-connectedness between mother and child.
https://www.sifa.sg/programmes/film/a-love-unknown

About Endlessness
Simultaneously an ode and a lament, About Endlessness presents a kaleidoscope of all that is eternally human, an infinite story of the vulnerability of existence in its beauty and cruelty, its splendour and banality.
https://www.sifa.sg/programmes/film/about-endlessness

Cemetery
After a devastating earthquake, Nga, an old elephant and Sanra, his mahout, set out to find the mythical elephant's graveyard. Poachers follow them deep into the jungle, only to mysteriously die one after another, until the spectator becomes the only protagonist.
https://www.sifa.sg/programmes/film/cemetery

Ema
After a shocking incident upends her family life and marriage to a tempestuous choreographer, Ema, a reggaeton dancer, sets out on an odyssey of personal liberation, in this incendiary drama about art, desire, and the modern family from director Pablo Larraín.
https://www.sifa.sg/programmes/film/ema

I Was at Home, But
Phillip, a thirteen-year-old school boy, disappears without a trace for a week. When he reappears, his mother is confronted with questions that lead to a changed view of her life and family.
https://www.sifa.sg/programmes/film/i-was-at-home-but

Isadora's Children
Following the death of her two children in April 1913, the legendary dancer, Isadora Duncan, created a farewell solo entitled Mother in which a mother cradles her child for the last time before letting him go. A century later, four women encounter the heartrending dance.
https://www.sifa.sg/programmes/film/isadora-s-children

No Data Plan + Distancing
Come discover two films about migration and statelessness: Distancing documents the Miko Revereza's decision to leave the United States and return to the Philippines, while No Data Plan captures the boredom, precarity and fantasies of an undocumented immigrant crossing America by train.
https://www.sifa.sg/programmes/film/no-data-plan-distancing

Sátántangó
On the heels of a financial windfall, members of a small agricultural collective set out to leave their village after the fall of Communism. A mysterious character, long thought dead, returns and alters the course of everyone's lives forever.
https://www.sifa.sg/programmes/film/satantango

So Pretty
Four young queers in New York City struggle to maintain their proto-utopian community against the outside world, as their lives curiously merge with the 1980's German novel So Schön by Ronald M. Schernikau.
https://www.sifa.sg/programmes/film/so-pretty

Tamaran Hill
On her mother's grave, Hinako sees a flower of cosmos. Her father calls to say he can't come home and repeats "Tamaran" in frustration. On her way home, Hinako buys a book, Tamaran Hill, only to find that same flower offered by her late mother's sister the next morning.
https://www.sifa.sg/programmes/film/tamaran-hill 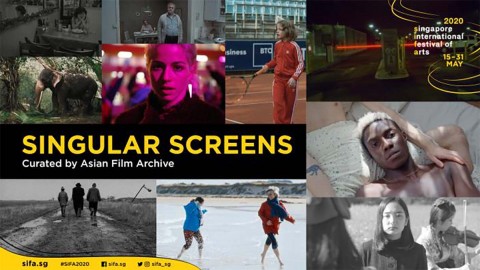