Organised by: Mapletree Arts in the City
Performed by: The TENG Ensemble

Have a splendid Lunar New Year with The TENG Ensemble as they return to VivoCity Singapore for the third edition of "Once Upon a Time" presented by Mapletree. Relish this musical and visual treat for the entire family filled with classic Lunar New Year tunes, performed in the Ensemble's signature East meets West style. Relive fan favourites from the "Stories from an Island City" and "Heirlooms" albums, complete with popular hits, performed alongside the winner of the 2014 reality programme Project Superstar, Alfred Sim. Laugh your hearts out with local actress and comedy firecracker, Jo Tan, as she shares with you stories of the festival's traditions.

The TENG Ensemble is a collective of music educators, scholars and award-winning instrumentalists. They bridge the traditional and contemporary, the East and West, and the old and new. Their unique brand of Singaporean music has brought them to key Asian cities to critical acclaim.

Alfred Sim is the Project Superstar winner of 2014. A local singer-songwriter who released his EP in 2016, he had also held a solo rock concert at Esplanade Annexe Studio in 2017. He has represented Singapore on various international stages and his music has constantly been well received by audiences.

Jo Tan is a singer, host and Paris-trained actress, who's performed in various cities including New York, London, and Beijing. In Singapore, you might recognise her from onstage (she was nominated Best Supporting Actress at the Life! Theatre Awards 2018) or in lead and recurring roles on Channel 5's 20 Days and Channel 8's Jalan Jalan. 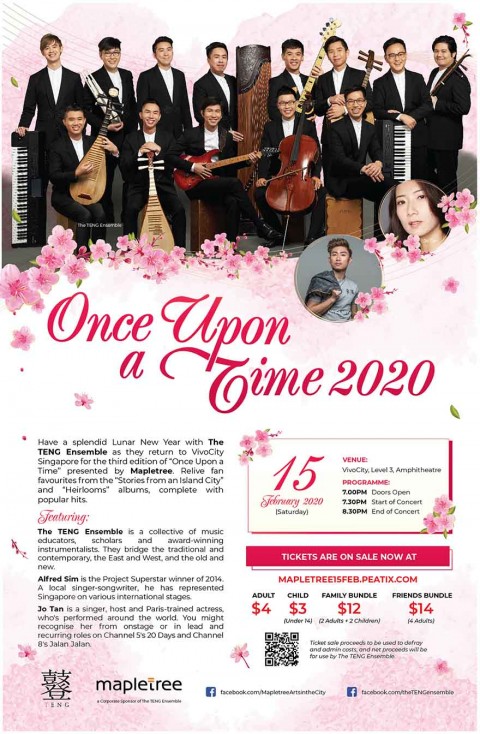