Organised by: The Columns Gallery

The Columns Gallery is pleased to launch Lee Sea Hyun's first solo show in Singapore with his breathtaking series of expansive, monochromatic landscape paintings that blend tradition and contemporaneity.

Lee's landscape paintings in the series titled 'Between Red' are epic depictions of mountainous terrains in Korea, created in a visual style reminiscent of traditional ink. Swathes of white canvas contrast against the painstakingly detailed sketches of undulating cliffs and craggy shorelines, rendered in delicate washes of monochromatic red that resemble the ethereal quality of discoloured film stock or retinal afterimages. Interspersed among these fragments of land are isolated dwellings and quiet signs of urbanity, such as a row of twinkling street lights that line a jetty or smoke billowing out of an unpopulated train station.

The overwhelming sense of tranquility that his landscapes conjure belie the fact that they are depictions of the Demilitarised Zone (DMZ) cutting across the Korean Peninsula, derived from Lee's personal experiences of conducting nightly surveys in the tactical area through infrared glasses as part of his mandatory military service. Lee's portrayals of the DMZ as an idyllic, natural world unmarred by human conflict or indications of a single, definite temporal plane rebukes the common associations that the DMZ and North Korea carry in popular imagination. 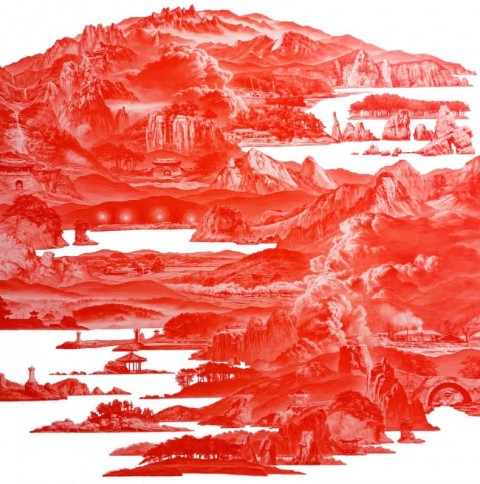