The Pulse of Ink 《墨脈》 - Ink Paintings of Irene Chou

iPreciation is delighted to showcase the ink paintings of Irene Chou, a key figure in the New Ink Painting Movement in the 1960s-1980s. Her works integrate the art and philosophy of the East and the West, and that of the past and the present, transcending through space and time. She explored, through her ink and colour paintings, the inner workings of the mind and its relationship with the mysteries of the universe.

This exhibition features Chou's paintings after her stroke in 1991 and works before her passing in 2011. During this period, confined and isolated in her physical body, her mind ironically became freer. Free to perceive beyond bounded rationalities, free to conceive different artistic expressions, free to pour out what is within her heart. Her art took a more introspective turn to the metaphysical contemplations of life and the universe – the art of her inner world. Also, during this period, many of her major works were being collected and displayed for example, at ADC Building (Brisbane), Menara Standard Chartered (Kuala Lumpur), Biopolis (Jurong Town Corporation, Singapore) and Keppel Bay Tower (Keppel Land, Singapore).

Irene Chou 周綠雲 (b. 1924-2011) was born in Shanghai in 1924. Chou received a modern education from St. John's University in 1945. Leaving Shanghai to settle in Hong Kong in 1949, she began to study Chinese painting under Zhao Shao'ang (1905-1998), an artist of the Lingnan School, during the 1950s. In the 1960s, Chou studied under the tutelage of Lu Shou-Kun (1919-1975), whose theories of New Ink Painting inspired her to move away from conventional Chinese styles towards abstract forms. She explored, through her paintings, the inner workings of the mind and its relationship to the mysteries of the universe. Chou often used the quote "The Universe is my mind; my mind is the Universe", taken from the writings of Chinese philosopher Lu Jiuyan (1139-1192) of the Southern Song dynasty. These words serve as an important source of inspiration for her. Her abstract paintings from the 1980s onwards exploded with stunning energies seen in both her dense, textural strokes and her broad, slab-like strokes of ink and colour. These powerful works have rendered her as one of the most innovative artists of the New Ink Painting movement in Hong Kong.

At the age of 67 in 1991, Chou suffered a bad stroke and moved to Brisbane to recover. As she slowly and painfully rebuilt her physical body, she rebuilt herself and her art in the process. She was persistent, creating paintings with great difficulties on the floor on her hands and knees. Through this, Chou was reborn as a stronger and more focused artist. The strong drive and perseverance to move forward and not look back moved Chou to perfect her techniques, propelling her works to new heights. She would adopt the drip and splash method to create a sense of movement and rhythm in her paintings. At times, she would use the sweep of broad brushstrokes liken a huge 'gulf' to create further impact.

Her works are collected in private collections and many prestigious international institutions and cooperations including; the British Museum, the Chinese University Museum, the Fung Ping Shan Museum and the Hong Kong Museum of Arts, the University of Hong Kong, the City Gallery in Manila, the Boston Museum of Fine Arts, the National Arts Centre, the National Museum of History in Taipei, the Queensland Art Gallery, the Melbourne Raya Gallery in Australia, GIC Singapore, Jurong Town Corporation, Harbour View, Keppel Land and the Museum of Brisbane. 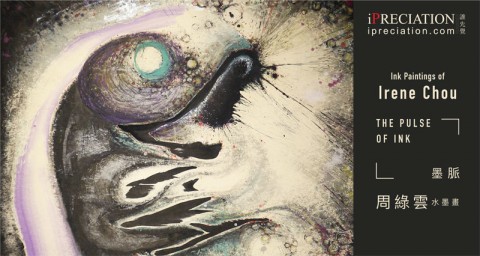