Organised by: The Private Museum

It is a relative norm for printmaking exhibitions to focus on traditional methods and the expanded practice of artists who adopted painterly approaches, exploring a certain degree of experimentation, challenging the convention on what is permissible, and demonstrating sophisticated control of process.

However, more substantial is the repeat pattern of thematic exhibitions, which emphasizes on the possibilities of print. A similar sentiment towards an often-repeated source can be reflected in the works of Albrecht Dürer, the rockstar of printmaking, whose meticulous and dynamic works are often first to be considered the most refined and celebrated, never failing to feed on the ecstasy of our sight.

Zaki Razak says, 'One definite consensus made is not to realise a medium-based approach exhibition but rather, break open the closed system of perception in printmaking and to instill a point of discussion on the phenomenon of printing. This, in turn, respond to the essence of the tradition and the emergence of the mechanism of multiplication and repetition, the context of its evolution and revolution, and what its consequence is in this day and age.'

In Repeat, Repeat, Repeat; revising the phenomenon of printing, the various artists revisit and redefine the history of printing by exploring an array of techniques and elements, covering a wide spectrum of topics such as urban culture in the digital age, science and spirituality, robotics and ink, as well as biblical art.

The artists' visual responses in forms and formation are meant to be symbolic visual cues to the journey of printing towards a knowledgeable ascent – to bring a certain degree of consciousness, what was before and after the invention of the Gutenberg printing machine, and how the printed matter has changed or affected the human condition. With the various forms of print presentation and medium, the artists redefine the phenomenon of printing and imprint into one's mind a fresh perspective. 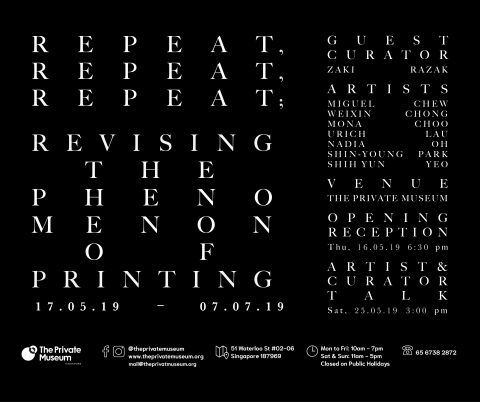