Victoria was sent by King Philip II of Spain to the German College in Rome, and studied with Palestrina, whom he succeded as Master of Music at the Pontifical Roman Seminary. He also headed the music at the German College, and working in Counter-Reformation Rome as an associate of St Philip Neri, he would have composed and sung for Pope St Pius V. At the height of his fame, in 1587, he left Rome and became chaplain to the Dowager Empress of Spain, spending the last 24 years of his life as a humble convent organist.

While his Tenebræ responsories are relatively well known, the rest of his Holy Week music is not, despite being equally sublime and mystical. We present a representative selection for each day, from Palm Sunday through to Holy Saturday, including some of his Tenebræ responsories, Lamentations, Hymns, and his Passion according to St Matthew.

There will be a programme with full translations of the sung Latin texts, and Cappella Martialis will be using the pronunciation of Latin as used in Spain circa 1600 A.D.

A priest who composed no secular music, Victoria's intense mystical style exemplifies the Spanish Renaissance spirit, no less than his contemporaries St Teresa of Avila (who wrote a reference for him) and St John of the Cross.

This programme is generously supported by the Embassy of Spain in Singapore.

Admission is free, but a retiring collection will be taken toward the upkeep of the host church and defraying various concert expenses. Please register to help us plan ahead for ushers and programme printing arrangements. 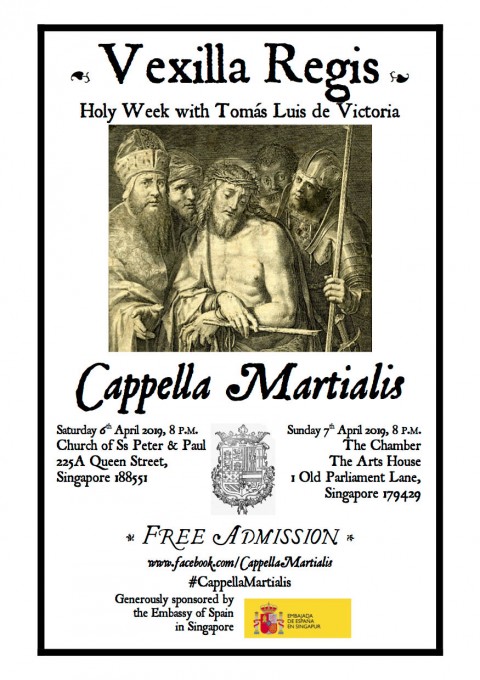