Organised by: HaveYouHertz, in collaboration with Anadigi Sound Lab
Performed by: Raf Soundwalker and Preston Lim

Join us in a workshop at a professional recording studio to learn how to bring out your best sound in your vocal recordings - this is a second run, back by popular demand!

This workshop is open to all vocalists, singer-songwriters, audio engineers, recording enthusiasts, and anyone doing home recording or wishing to learn something about recording techniques. Principal audio engineer and music producer at Anadigi Sound Lab Raf Soundwalker will bring you through:

- How to take your home recordings to the next level

- The art and science behind a great vocal mix.

This event is free admission and supported by ANADIGI SOUND LAB and the LIFELONG LEARNING COUNCIL.

TRAILER from the first run of Vox Recording 101: https://youtu.be/psfV4g7yG0M

About the Instructor - Raf Soundwalker

An audio engineer with a proven track record in music production, recording, and post-production across Singapore, the UK, and Australia, Raf Soundwalker has engineered recording sessions and live shows for Snarky Puppy Tribute Band (Singapore), Druv Kent Live Show, Karen De Silva String Quartet, The Great Life Project, SingJazz Festival, to name a few. In recent years, he has produced for The Kevin Michael Project, local world fusion music ensemble Flame of the Forest, and more recently for the single and upcoming EP release for local singer songwriter Shak'thiya. He is also currently Lecturer of Audio Engineering in Orita Sinclair School of Design and Music.

About the Vocalist - Preston Lim

Preston is a software engineer by day and musical theatre actor by night. Theatre credits include: Cliff Bradshaw (Cabaret), Mark Cohen (RENT), and The Baker (Into the Woods). He currently studies opera with Dr. Thomas Manhart, and has a BS in Bioengineering and MS Computer Science from Stanford. 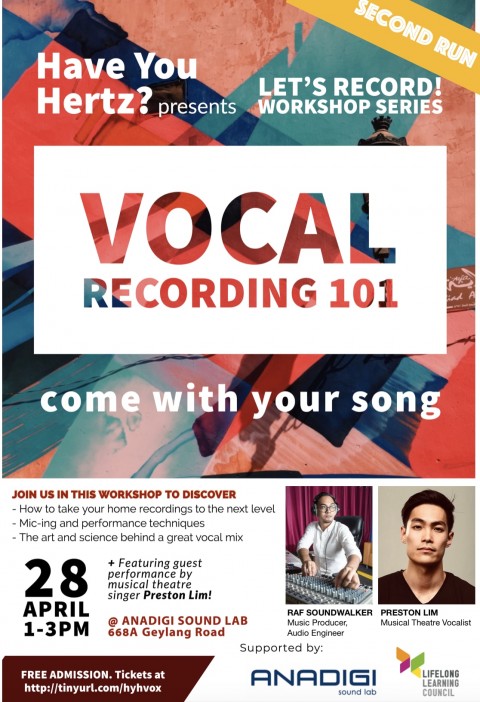