"Once upon a time, there were three children..."

Three Children gamboled onto stage in 1988 in a landmark Malaysia-Singapore collaboration helmed by Ong Keng Sen, artistic director of Singapore's TheatreWorks, and Krishen Jit, co-founder of Malaysia's Five Arts Centre. Written by Malaysian playwright Leow Puay Tin, the production astonished audiences on both sides of the Causeway, with critics calling it "inspired" and "a dramatic masterpiece".

Over three decades later, two arts centres – Five Arts Centre in Kuala Lumpur and Centre 42 in Singapore – come together to present Are You Game, Sau(dara)?, an exciting double-bill of new works inspired by Leow Puay Tin's original play. Malaysian theatre practitioner Fasyali Fadzli has fun with childhood games in an audience interactive work called Are You Game?. In Sau(dara), Singapore-based theatre group Bhumi Collective explore themes of childhood, memories and relationships in a performance that combines text, dance and music.

Come catch two exciting new works which have journeyed into the past and emerged with fresh new perspectives. In the words of Leow Puay Tin's three children, "See-you-see-you-m-b-e-r!"

An interactive performance inspired by the tabletop role-playing game format, Are You Game? invites audiences to participate in a game with the performers solving riddles and challenges. Together, they will go on a journey through the stories of the people of Melaka, inspired by the characters and locations in Three Children.

Four women discover that even in their twenties, growing up female and Malay in Singapore means that you'll never truly be a grown up. To navigate the winds of change, they replay the games they used to play and songs they used to sing. Four friends relive stories of themselves and others like them. Of growing up and growing older, of growing apart and growing (none-the-) wiser, Sau(dara) is a tempestuous retrospective of womanhood. A work-in-progress version of this work was first presented under Centre 42's The Vault programme in 2018.

Performed in English and Malay, with English surtitles provided. 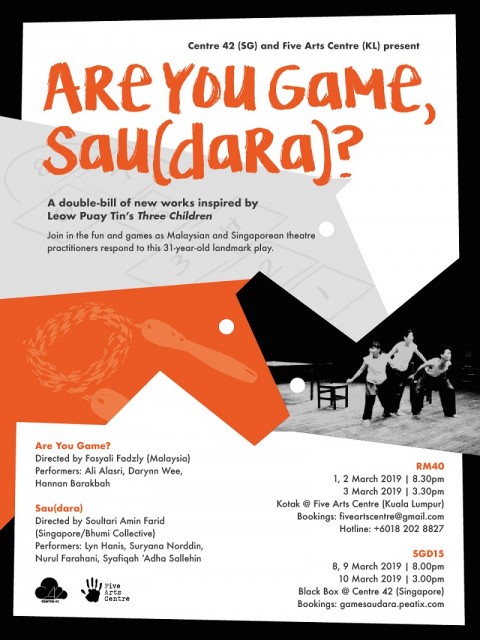