Organised by: Esplanade – Theatres on the Bay
Performed by: The Sixteen (UK)

One of the world's most renowned choirs The Sixteen brings you an evening of choral music filled with embracing warmth and crystal clarity.

The UK-based ensemble conducted by Harry Christophers is recognised for its hallmarks of tonal richness, expressive intensity and compelling artistry. Comprising a choir and a period-instrument orchestra, they are peerless interpreters of Renaissance, Baroque and modern choral music, and have introduced works drawn from over five centuries of sacred and secular repertoire to audiences far and wide.

An Immortal Legacy was devised to present secular works within The Sixteen's customary sacred output and depicts how contemporary composers revel in the glories of the 16th century to the present. This concert's repertoire focuses on several of England's finest composers including Thomas Tallis, Thomas Morley, William Byrd, John Sheppard, Orlando Gibbons, Benjamin Britten, Sir Michael Tippett and James MacMillan. 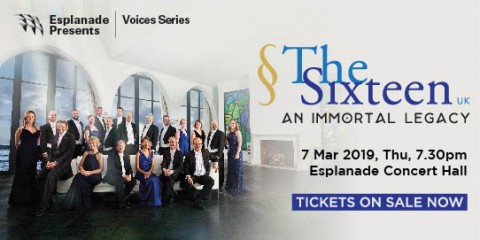