Known for their eerie mix of modern rock and alternative neoclassical melodies, SANGRIENTO is proud to present a brand new concept album accompanied by an original comic, where each song in the album represents a chapter of the comic.

Surrender yourselves to the world of 「Blood Pact」, an epic tale set in a post-apocalyptic steampunk wasteland. Get ready for headbanging guitar action and soaring orchestral accompaniments as we follow the adventures of Jade and Jaden, protagonists of the story. The graphic novel is drawn by Christal (drums) and limited copies will be on sale on the event day.

「Blood Pact」is set in a post-apocalyptic fantasy wasteland where mankind has rediscovered the use of magic and warring factions have emerged over differences in ideologies. The Elites are constantly defending themselves against the attacks of the Zarkon Empire, whose goal is to rule the new world. However, reforms in the new empire impede their progress, with a rebel faction seceding after disagreeing with the visions of the new Empress.

Follow the orphaned twins, Jaden and Jade, as they navigate the dangers of a war-torn sandscape under the mentorship of Kane, a close friend of their late parents. As they grow more powerful and rise from strength to strength, betrayal and hurt lurk on the horizon.

Doors open at 6 PM.
Alcohol is available at the event.
Happy hour is from 5 PM to 7PM 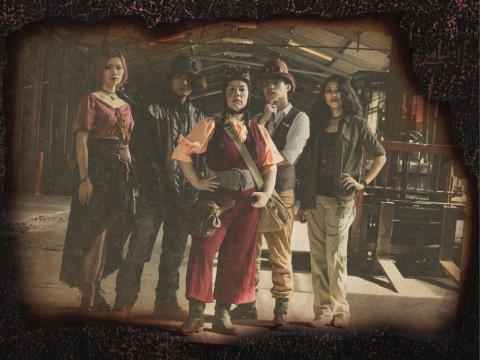