Creative Coincidences - Behind the Scenes of Sau(dara) 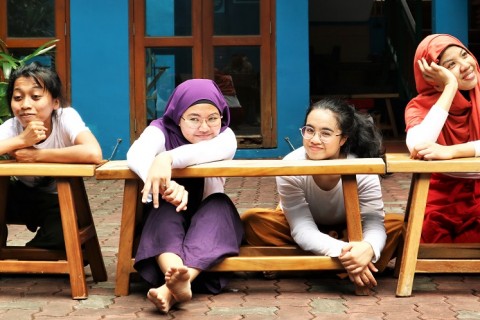 Sau(dara) is Bhumi Collective's contemporary response to Leow Puay Tin's Three Children, which was written thirty years ago. We caught Sau(dara) over the weekend and thought you would be losing out much if you have not read this article to prime your experience of the play.

Here is an excerpt:

“One thing we were very clear of: the final production of Three Children would spring from the imagination of the actors,” [Ong Keng Sen] wrote. “They would build the world of the children, viewed through children’s eyes. The directors would act as catalysts, pushing them to explore and confront themselves. The process was built on experience, memories; felt by the body rather than rationalised by the mind.”

Similarly, Sau(dara) is created based on the team’s own childhood memories. The title of the piece is a play on the Malay words “saudara”, meaning siblings or relatives; “sau”, which is the sound of wind; and “dara”, which refers to young women or virgins. It is collectively devised by an all-female cast – dancers Lyn Hanis Rezuan and Syafiqah Shaharuddin (Syafiq), singer and actor Suryana Norddin (Sue), and musician Syafiqah ‘Adha Sallehin (Syaf) – with Amin facilitating the process.

To get them started, Amin encouraged everyone to draw objects and memories from their childhood, which led to some very frank – and at times painful – discussions as they slowly opened up to each other. The team is honest in admitting that this was initially a challenge, as none of the cast members knew each other prior to this project, and none of them had ever devised a work from scratch before. Lyn, for example, struggled with the exercise because all she could recall was the verbal abuse that her mother hurled at her when she was young.

Each of the actors then went on to build their own monologues around particular themes or topics that they would like to explore. Lyn bravely followed through by delving into her difficult relationship with her mother, Sue questioned what it means to be a good friend, Syaf explored feelings of not being good enough, while Syafiq examined what it’s like to appear invisible to those she cares about. These are difficult things to work through, but Amin is grateful that everyone has embraced each other’s experiences with open hearts and minds.

This article was originally published in Issue 7 of Blueprint, Centre 42's quarterly e-newsletter. Centre 42 is a non-profit theatre development space committed to the creation, documentation and promotion of texts and writings for the Singapore stage. www.centre42.sg

Bhumi Collective will be bringing this project to Kuala Lumpur to further develop it with Five Arts Centre in March next year. It will be part of a double bill with a Malaysian team selected by Five Arts Centre, who will also be responding to Three Children.