A Playful Exploration of Form and Matter — Interview with 所谓工作室 Matter.Less 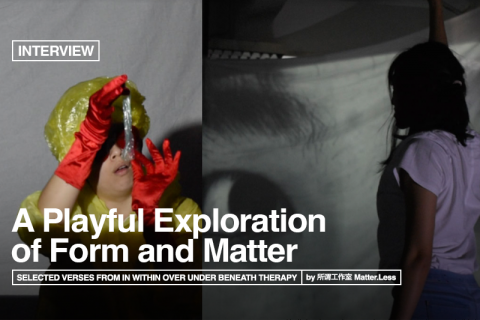 I first knew them as a literary group. Then, they started to turn poems into performances. Their Instagram page is full of abstract images and videos, playful combination of words, as well as activities in various forms. When they started out in 2018, their social media handle reminded me of a Mandarin earworm. For four years their existence on my social media wall is a cacophony of colours, textures, languages, font types, character strokes, music and sounds. I couldn't quite grasp what they've been doing.

So, before they stage their upcoming production — Selected Verses from in within over under beneath Therapy (in short, SVT) — I grabbed a chance to ask them these questions:

Matter.Less is a less poetic version of our Chinese name, “所谓” (suo3 wei4), which can be roughly translated to the “so-called”, to refer to what is being said by others. It kind of serves as inverted commas, which ties in with our postmodernist aesthetics, but also the opposite of “suo wei” is “无所谓” (wu2 suo3 wei4) which means something does not matter, or indifference to it. We wanted to choose a name that highlighted playful experimentation in our work, as opposed to the seriousness that tends to be assumed when approaching literary text and literariness. Some of this meaning is lost in our English name Matter.Less, but it also echoes the idea of giving space and time to things that are presumed to be of less significance or value, and exploring the undefined and unintelligible.

2. You announced in February that Matter.Less has transitioned from a poetry collective to an interdisciplinary collective. Did you see it coming, when you started out in 2018, performing spoken word at the National Library building? What are some of the factors driving this change? What inspired you to evolve to create and perform in other forms?

When we started out in 2018, we were inspired by the boom in the English slam poetry and spoken word scene, to bring the personal edge, political incisiveness and connections to oral tradition to the Chinese poetry scene. Our very first poetry performance event was probably the closest to “slam poetry” that we ever got, and even then it was quite different from English slam poetry, in part because Mandarin just does not sound the same. Our explorations were informed by our members’ interests in theatre, film, literary translation and adaptation, because these were the elements they brought into their relationship with text and the kind of work they wanted to create. 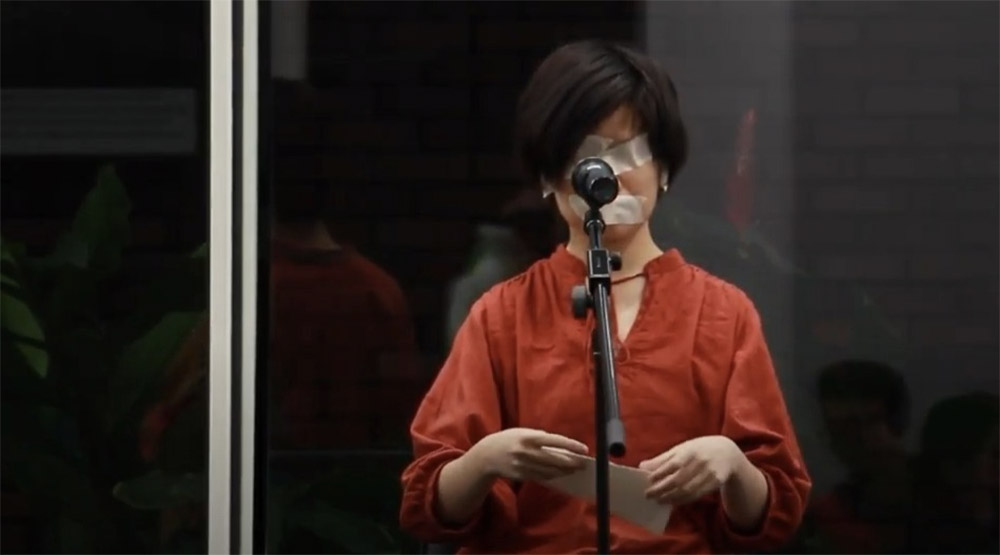 Our events therefore very quickly moved into the realm of multimedia adaptations, physical theatre, and broadly-defined text-based work that tended towards the abstract. It also seems natural because we were initially drawn to the everyday applications, the re-contextualisation and the unexpected settings of poetry. Rather than “literature” as often assumed to be in books and libraries, we were interested in “poetry” as something alive, taking space and time, spoken and embodied. It also meant moving away from “literature” and “poetry” to finding “literariness” and the “poetic” in daily life, popular culture, performance making and more. None of us are purists in our relationships with literature, it does not start and end with words on a page, it has always been literariness X theatre, literariness X music, literariness X film etc.

We had discussions about how we were moving away from experimentation centred around poetry or even literature, to interdisciplinary experimentation in general, and felt that a name and branding change was long overdue for describing the direction we have been heading in for the past few years. It is also in part because of the collaborators that we wish to work with, particularly with Selected Verses […] Therapy we are working with writers, performers, directors, devisers across languages, styles and art forms, and this is something we hope to continue developing in future.

3. Looking back at the first four years of the collective’s journey, could you share with us some of the challenges you faced as a new entry in the local arts scene? Is the COVID-19 pandemic a hindrance to art creation, or a new opportunity for new art forms?

It is difficult for us to find our place in the local arts scene as an interdisciplinary and experimental collective, to fit into existing preconceptions of categories of literature, theatre, film etc. This is especially a challenge when approaching venues and funders who are looking to tick certain boxes. For example, there is a lot of support for developing local literature, but not necessarily for dramatic literature or theatrical presentations, nor when it is co-created, devised or experimental formats.

It also takes time for us as early-career artists to develop ourselves and reach a level of artistic achievement and recognition that draws stable audiences and funding. Especially with an experimental focus that is more process-driven, it is difficult for us to know what our final products will look like, and to communicate the value of our work to other organisations. There is also a pressure to work towards and achieve some form of artistic respectability, when this can impede our free exploration.

Our re: Verse 4.0 took place just before lockdown was announced, but COVID-19 caused us to stop live performances and in-person activities for almost two years. We did a lot more individual or remote filming, writing and visual arts in this time, and received the National Arts Council’s Digital Project Grant to create a short film series and moving image piece.

While we still managed to find a way to create work during lockdown, COVID-19 drove each of us into a bubble, and we found it difficult to find motivation to come together, even online, to create work. We still find it the most valuable to our process to be able to meet in person to brainstorm and devise work.

About Selected Verses from in within over under beneath Therapy

4. Why did you choose to stage these pieces?

We wanted to create performances about mental health issues because we feel like there are certain expectations about how they are portrayed on stage - for instance the types of characters, plot lines, issues. But also there is a tendency to use mental health crises as dramatic action and the climax, when there is so much behind. There is also a narrow conception of what mental health issues look like, and they are concentrated around depression, suicide, grief etc. Which is not to discount their representation, but we want to start conversations around issues that are less spoken about or even impossible to articulate.

For example, Danial Matin’s Here Where You Were looks at elderly suicide in the Malay Muslim community, raising questions about religion and intergenerational communication. Lim Ci Xuan’s GAI looks at whether sex workers are inevitably vulnerable to mental health issues, as well as isolation and invisibility caused by criminalisation. Rachelle Lee’s Interview with a Water Bear is a film that builds a unique and poetic mindscape, looking at bipolar disorder and animal companionship. These texts all explore more hidden issues using less conventional styles, in a bid to open a space that provokes new conversations.

Staging is also very important to the creation of new texts, as performance allows us to dig deeper into the different dimensions of the pieces, and seeing it embodied by actors helps our writers to develop and refine their text. Seeing text in space also invites dialogue with other collaborators and audience members. 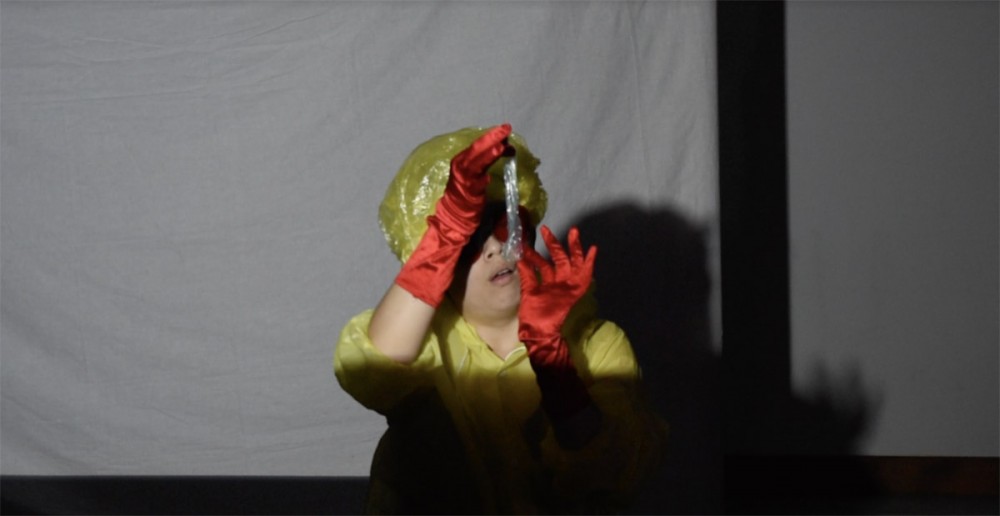 5. The performance is organised in two separate sets of short works. Could you share with us your approach in curating the programme? How does one set relate to the other?

SVT was meant to be a platform where writers can respond freely to the topic of mental health, and the curation came at a later stage. They are roughly divided into the broad themes of "autonomy" for "The Black Sheep’s Tales" and "love" for "The Gentle Lions’ Tales", though I wouldn’t say that it is strictly curated by these two themes, as many pieces touch on both.

Rachelle and Ci Xuan curated the two series with the main concern of balancing the emotional intensity of each set, allowing audiences to go on a journey of varied pieces, styles and moods for each set. Another consideration was the nature of the pieces — there was an even split of text-heavy pieces and more affective, sensory pieces. We placed the more cerebral, text-heavy pieces in the matinee show, when audiences likely have better capacity to process logical concepts and ideas, and have the more sensory pieces at night. Autonomy, after all, is fought for with logic and words, while love exists in a more kinaesthetic space.

Strangely and unintentionally, there also appeared to be a gender element in the division, where the pieces in "The Gentle Lion’s Tales" were entirely conceptualised and performed by women, while none in "The Black Sheep’s Tales" were by women. 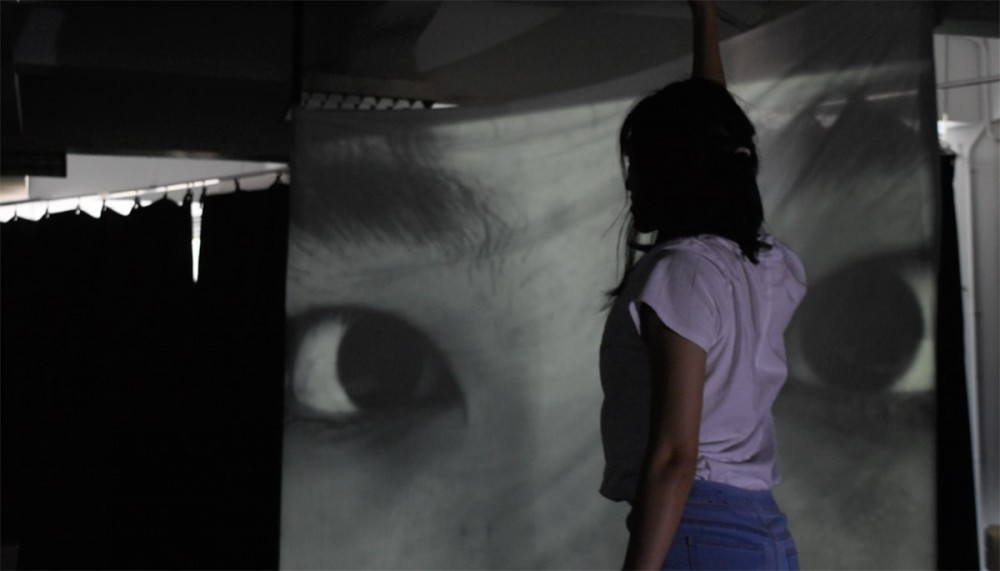 Clocked on the Train — part of "The Black Sheep’s Tales"

6. How does the team navigate the sensitivity and care with which to present your creative thoughts and artistic intentions in these forms to the audience for such delicate topics?

We are very fortunate to have the support and mentorship of Chng Yi Kai, an artist who has experience with writing, directing and facilitating a verbatim piece on suicide, and he has been a part of many conversations about mental health.

We are also grateful for the guidance of IMH support staff, Clarence, who vigorously vets each of our pieces to ensure the accuracy of our representation of various aspects of mental health, and the safety of the audiences who go through these pieces.

While considering how to explore sensitive issues, we also wish to avoid self-censorship because these stories are already censored enough, whether in media, or individuals having no avenue to share their stories. Instead, we sought ways to explore these topics in a safe manner. One key way we attempted is through the introduction of aesthetic distance, where emotionally intense text can be turned into projections or movement, where the text serves as a prompt rather than being delivered directly. We also tried the possibility of injecting humour into conversations, rather than falling entirely into the tendency of “depressing”, pensive or reflective moods for such topics.

Shows with potentially triggering topics tend to encourage audiences to walk out of the performance if needed, but we find that this may often be ineffective and impractical. Facing a trigger is often a paralysing experience, and coupled with theatre conventions of staying in one’s seat and the negative attention that flouting this can attract, audiences are unlikely able to just leave. On a more practical note, audience members have paid to watch shows and where possible we would prefer not to diminish their experience, as being triggered might require some time to manage and might take them out of enjoying the rest of the show. While walking out is definitely still an open option, we are trying to find alternatives, including providing writing materials and encouraging people to write or doodle, to help manage responses to triggers while still experiencing the show if they wish to, or roving audiences, where people can move their chairs and sit as close or as far from the performance as they wish.

7. What matters to you at this point in time? 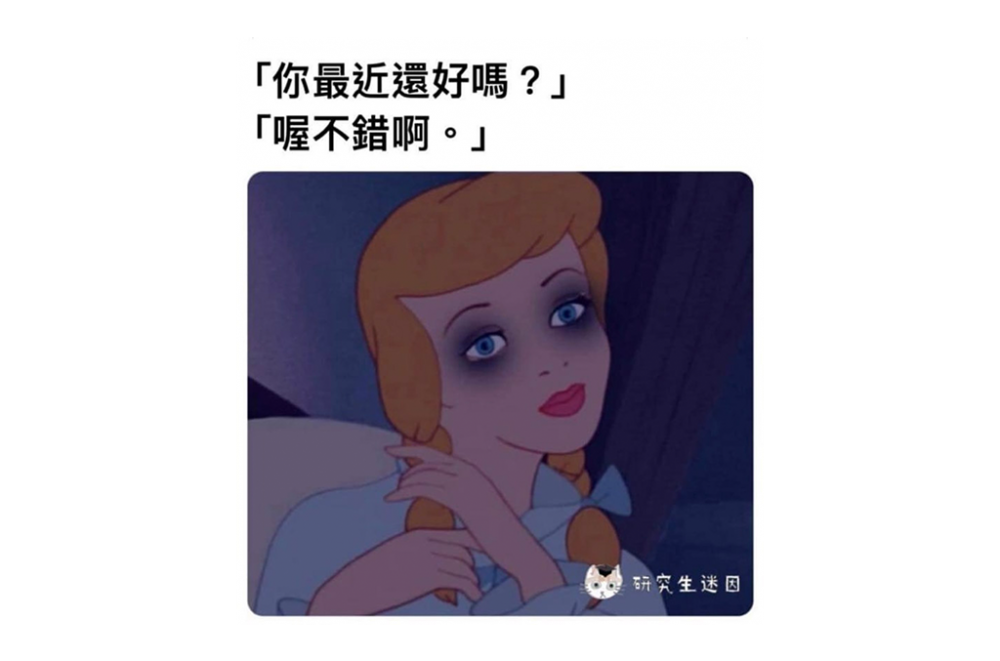 Everyone has been working so hard, and we just want to eat hotpot, go get Gobi Desserts (non-spon) and go for a company retreat and sleep :).

Selected Verses from in within over under beneath Therapy